It is with great joy that we hear today from the Vatican that two previous Bishops of Rome, Blessed John XXIII (1958-1963) and Blessed John Paul II (1978-2005) are to be declared Saints by Pope Francis.

Born Angelo Guiseppe Roncalli in 1881, he was the fourth child of fourteen. He was ordained a priest on August 10 1904 and served in various posts including appointment as Papal Nuncio in several countries, including France (1944), Bulgaria and Greece. Pope Pius XII made him a Cardinal on January 12 1953 in addition to naming him the Patriarch of Venice. His election as Pope on 28 October 1958 at the age of 77 came as something of a surprise. Those who expected him to be a caretaker Pope were even more surprised by his calling of the historic Second Vatican Council (1962–1965), the first session opening on October 11 1962. He did not live to see it to completion, dying in 1963 on June 3 of stomach cancer, four-and-a-half years after his election, and two months after the completion of his final and famed encyclical, Pacem in Terris.

Blessed John XXIII’s passionate views on equality were summed up in his famous statement ‘We were all made in God’s image, and thus, we are all Godly alike.’ He was known to many as “Good Pope John”.

He was buried in the Vatican grottoes beneath Saint Peter’s Basilica on June 6 1963 and was beatified on 3 September 2000 by Pope John Paul II. Following his beatification, his body was moved from its original place to the altar of Saint Jerome where it could be seen by the faithful. 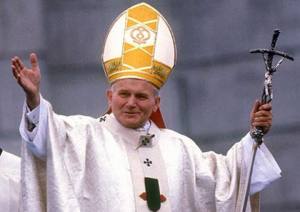 Born Karol Josef Wojtyla in Wadowice,Poland, in 1920, Blessed John Paul II was acclaimed as one of the most influential leaders of the 20th century. He is credited with helping to end Communist rule in his native Poland and eventually all of Europe. John Paul II significantly improved the Catholic Church’s relations with Judaism, Islam, the Eastern Orthodox Church, and the Anglican Communion. Though criticised for upholding the Church’s teachings against artificial contraception and the ordination of women, and for his support of the Church’s Second Vatican Council and its reform, he was also praised for his firm, orthodox Catholic stances. He is also renowned for his implementation of several papal documents pertaining to the role of the Church in the modern world.

He was one of the most travelled world leaders in history, visiting 129 countries during his pontificate. As part of his special emphasis on the universal call to holiness, he beatified 1,340 people and canonised 483 saints, more than the combined tally of his predecessors during the preceding five centuries. He named most of the present College of Cardinals, consecrated or co-consecrated a large number of the world’s past and current bishops, and ordained many priests. A key goal of his papacy was to transform and reposition the Catholic Church. His wish was “to place his Church at the heart of a new religious alliance that would bring together Jews, Muslims and Christians in a great [religious] armada”. On 19 December 2009, John Paul II was proclaimed venerable by his successor Pope Benedict XVI and was beatified on 1 May 2011 after the Congregation for the Causes of Saints attributed one miracle to him, the healing of a French nun from Parkinson’s disease. An second miracle was approved on 2 July 2013 and has now been approved by Pope Francis thus leading to his canonisation later this year.

(Based on the Wikipedia Articles)

In union with all Catholics the world over, the NCC gives thanks for the lives of these two great men of God.

Presiding Archbishop of the National Catholic Church of the United Kingdom and Ireland; Archbishop of Anglia and Cambria; Parish Priest of Our Lady of Walsingham, St Alban & St John Paul the Great, Bedford View all posts by archbishoppeter